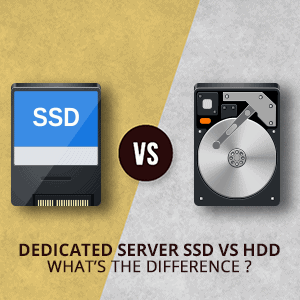 With every new technology and innovation, there is a new update too. The machines and servers hold a large part of files, applications, and data. So, data storage plays an important role in the world of storage technology.

The data storage concept for a non-tech savvy person is nothing but just a way of storing data on a computer or server. But, for developers or tech-savvy people understanding the difference between storage options is critical.

When you are aware of data storage and dedicated options for storage, it’ll help you to make a well-informed decision when it comes to selecting the type of hosting options available. There are two main options of data storage, namely SSD and HDD.

Dedicated server SSD has no moving parts, as they provide basic storage. They can, however, read and write the data with greater efficiency. SSD (solid-state drive) stores all the information in microchips that are quite similar to a memory stick or flash drive.

HDD (hard disk drive), on the other hand, has moving mechanical parts that require power and have mechanical limitations. It is made from a metal disk with a magnetic coating that stores your data. A reading arm hovers over the disk that stores & extracts the data as and when the data is required.

In comparison, SSD serves faster data than HDD. Like these, there are other few differences between SSD and HDD, which we will look at below.

Want to buy a dedicated server for your website? Get a massive discount on your purchase by using HostGator Coupon codes.

Want to Know the Difference between SSD and HDD?

When choosing a hosting plan, it pays to know the type of storage it offers, as a lack of proper storage capacity can lead to a variety of issues. Dedicate server comes with both SSD as well as HDD storage. Which to pick between the two would depend on your business requirement and budget. However, by knowing which is the superior option between HDD and SSD, you would be able to make a well-informed decision that can greatly benefit your business. Thus, let’s quickly take a look at the difference between the two in this SSD vs HDD comparison post.

1. SSD vs HDD - Speed and Performance

SSD works and performs more competently when compared to HDD. In this day and age, when everything happens in a split-second, waiting for the data to load can be quite a tedious task.

If your site stores a lot of data, then HDD can affect your site’s speed and loading time.

Verdict: If you compare between the two, then SSD is a clear winner in speed and performance both. No one likes to wait for the loading of data or site, so faster performance gets an advantage.
Top

Data security is essential in these vulnerable times when there is a constant risk of a data breach.

What data security does HostGator provides with its hosting plans? Read this HostGator review to find out!

Talking about reliability, SSD’s work on fewer parts which means that they won’t easily break. SSD’s also don’t need frequent repairs as they are more reliable than HDD. In the case of SSD’S, the longer you will work on them, the more reliable it will become.

HDDs, however, are a good option for managing a larger amount of storage. HDDs can store up to 2 terabytes in laptops and 10 terabytes in desktops.

Power consumption is an important factor to consider while choosing a Dedicated Server with SSD or HDD.

Verdict: SSD consumes lesser power when compared to HDD. So, it is ideal for your heavy workload.

Looking to purchase a Dedicated Server with SSD? Check out the plans offered by HostGator and buy today with HostGator Hosting coupons to get a discount.

SSDs are more versatile when compared to HDD. The difference between SSD and HDD is based on its functionality and overall versatility.

SSD tends to cost more than HDD, as they deliver better performance and more storage space. The SSDs that feature NAND and SLC is quite expensive.

On the other hand, the HDD cost less and provide affordable options.

With changing times, the adoption rates for SSD have increased, and the cost difference has begun to level. Some dedicated hosting providers also offer special SSD plans based on servers.

But the higher cost of SSD has also become an issue for most users. As per the GB level, SSDs are priced 10 times higher than HDD. The storage cost alone has become a major factor for server configurations, which has caused a mark difference in the cost of servers.

If you are looking for a drive replacement, then you need to know about compatibility as well. Some systems won’t work with SSDs, do check on this part.

Most computers that are now available with HDDs are compatible with both, so there are no issues. Older devices or devices with limited functionality will only support HDD, so switching to SSD will become tougher.

Verdict: Both offer similar compatibility depending on the system or server.
Top

Just like the best Linux server, while selecting dedicated hosting solutions, you should consider many factors. The difference between SSD and HDD is one of the factors.

HDDs are ideal for storing a large amount of data while SSD’s offer complete versatility in storage and have also gained popularity over the years.

Once you are sure which server is perfect for your business needs, you’ll be able to make an informed decision.

Though popularity wise, SSD scores higher any day. So pick from the best!

Want to register a domain along with dedicated hosting? Here are HostGator domain coupons to get you started!

What is Difference Between COM and CO Domain?
How To Increase Traffic on Website – 5 Simple Ways

Sudhir Bhushan is a Tech & Social enthusiast. He is also a Web Entrepreneur by Profession and loves to write about the latest trends in Social Media & SEO. You may follow him on Twitter